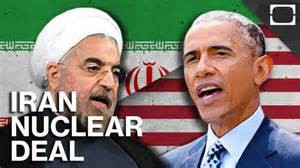 In the wake of the Iranian-U. S Nuclear Treaty Agreement, where by nearly all conscious observers the U.S government went far beyond bending over and grabbing it’s ankles to give Iran all that it wanted out of the deal. The Agreement between Iran and the 5 Permanent members of the U.N Security Council – the U.S, the U.K, Communist China, Russia, & France, plus Germany gave Iran access to Trillions of seized funds and blockaded military hardware and technology. But, what may be an even greater prized for Iran is the public relations value of the strong appearance that they surrendered little to nothing of it’s core principles or position. It does not have to denounce it’s sponsorship and promotion of terrorism. It does not have to denounce it’s position of wiping Israel off the map. And it did not give into demands of unfettered inspection of it’s nuclear sites nor disclose the status of it’s nuclear program.

There are many who strain to draw comparison to this perceived U.S/Obama led gross capitulation to Iran and U.K/Chamberlain’s towards Hitler’s Germany [the Munich Pact Treaty] that arguably led to WW 2. But I like to look at the possible intent and motives of the two main characters – Obama and Chamberlain.

By all historical accounts, British Prime Minister Neville Chamberlain loved his country and it’s people and was determined to not get his people involved in another war, like the WW 1. And even though he eventually saw the error in his position, he relented to his arch political nemesis, Winston Churchill. But he stayed on to serve in Churchill’s Administration. As for Mr. Barry-Barack Hussein Soetoro-Obama [Barry Soetoro is Barack’s official name age 6] his loyalty is very much in question. Though seemingly of little to no interest to the U.S Establishment News Media.

The U.S Media appears to be most disinterested in the fact that Mr. O was raised by two Muslim fathers of nations which did not hold western culture or America in high regards. He was not taught of Americanism like many of us have, due to the fact that he did not step foot on the Continental United States of America until his college days where he became heavily influenced by anti-American/Marxist/Communist/ Socialist personalities, such as Saul Alinsky, Bill Ayers, and Reverend Jeremiah Wright. The U.S Media seems narcoleptic when it comes to Mr. O’s relationship with Islam and his brother, who is linked to the Iranian-backed Muslim Brotherhood. And I have not even included Mr. O’s repeated expressed mantra of America and the United States’ unjust dominant position in the world, as evidenced by his infamous Apology Tour and his unfailing attempts to degrade and or denigrate America’s culture and history whenever he’s presumably out of ear shot of the American people. Even on foreign Muslim soil as in Turkey he thought it was a good time to shine light on America’s “dark periods”, referring to our nation’s slave period. Of which he has a connection only through books and movies, for neither Kenya nor Indonesia were sources of American slaves.

Though the Media can easily gets hyper invigorated over the fact that Republican Candidates Marco Rubio has had a couple of speeding tickets in the past and has a bought a boat, Ted Cruz was a dual Canadian citizen, and that Wis. Governor Scott Walker dropped out of Marquette University, it seemingly sees nothing at all to be the slightest bit inquisitive of in the current occupier of 1600 Pennsylvania Ave. Mr. O will be the face of what future historians may call the most tragic military agreement ever! If there has ever been a nation’s leader that has epitomized such a severe indifference and hostility to the fundamental principles and traditional values of the very nation that he or she was supposed to represent and serve as Mr. O, history has yet to give him or her their just due.

What If Obama Was White?