I had a discussion with a friend the other day about the Presidential Election and how so many of her friends who are devout Democrats, but are not into the apparent growing entitlement mindset.  When I attempted to explain that people such as her friends who unabashedly embrace this new extreme political liberalism, and progressivism, would be shouted down as bleeding Communist and or un-American just 30 or 40 years ago and would have not dared to let such expressions be uttered publically.  This ever growing notion that everything bad that happens to someone is the fault of someone else, that if someone goes through life making bad decisions they can then look to take the wealth and benefits of those who have made good life decisions, and that the government, in particularly the federal government,  should do for someone which they chose to not do for themselves, i.e. provide them healthcare, retirement, or education, is relatively a new state of mind that has taken nearly 60 years. Since the “New Deal” and the “Great Society” enactments, governmental-paternalism and the relinquishment of all personal accountability and responsibility has now become generally accepted by a great number of Americans.

Today Americans actually view Socialism and Communism favorably; some preferably, to American Capitalism.  We have more Americans on Welfare and receiving some form of government assistance to meet basic living needs.  This would have been intellectually repugnant to Americans in my grandparent’s day.  But when one lives in a time when the notion of absolutes-that there are limits on one’s behavior and conduct- and traditional Americanism, such as a belief in God, love of this country, devotion to the family and union between a man and a woman, you have the right to what you earn, and respect for elders, is viewed as radical and cruel, what is there to stop the slide into the social moral abyss where everything and anything is acceptable?

As recently as last year a NY Times article by David Brooks stated  of an eminent Notre Dame sociologist’s  research of some  230 young adults from across America, “The default position, which most of them came back to again and again, is that moral choices are just a matter of individual taste. “It’s personal,” the respondents typically said. ‘It’s up to the individual. Who am I to say?’ I think that this type of attitude expressed sums up what a critical situation our nation is in morally.  This notion that one’s actions and behavior is strictly a matter of individual taste or choice is the genesis of this anti-judgment culture – where no one is allowed to judge someone else based on their actions.  Particularly if those actions result in negative consequences.  But, when those actions go astray, it is someone else who is the blame and who has to bear the cost of it.

Morality is defined as “the rightness or wrongness of something as judged by accepted moral standards.”  This great nation’s Christian foundation isn’t written in stone, no more than English being our official language.  It was presumed to be eternally self-evident through our actions and societal standards.  The very principle of taking from one American based on their wealth to give to another simply based on their lack thereof, by force via the government, used to be totally unacceptable in this nation.  Right and wrong behavior used to be more clearly identifiable as measured by our Biblical foundation.  And as a community of individuals we use to feel that it was our right to speak out on behaviors and actions that we thought to be out of line or inappropriate based on our foundation.

But those days seem to be going the way of the 8-Track Tape Player and the 18 year old virgin.  The people of the United States today have become a nation of no apparent standards, no absolutes. Where nearly anything and everything goes or can be excused.  Christianity is under constant assault in the nation and marginalized as to not offend other religions.  Ethics are on the decline amongst the young.  And Socialism is no long a four letter work culturally, as evident by the re-election of a man whom espouses nothing but a Marxist ideology of wealth redistribution and the dismantling of America’s fundamental base of individual responsibility and self-governance.  So with such a man as the face of America, his America appears to be the new norm.  One that is in decay and decline.

But, at the end of the day it comes down to what we as a nation of free-minded individuals are willing to accept morally.  What are we to accept as right and wrong, good and bad?  Does the question any longer matter?  Alexis de Tocqueville said once about America greatness, “America is great because America is good. If America ever ceases to be good it will cease to be great.”  It is up to us to choose.

Ferguson Shines A Stunning Light On the Crippling Reality Of The Politics Of Racial Economic Division In America Under The Reign Of U.S’s First African American President 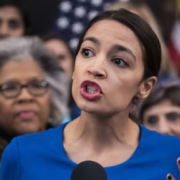 Rubio Is The Republican Obama

Obama's Extremely Flaccid Reaction Towards Russia's More Demonstrative Global Military Posture Is Not About Being Weak Regarding Russia, But Extreme Antipathy Regarding Americanism.

Why Is Americanism On Life-Supports?

Walking back from the edge: The aftermath of the 2012 Presidential Production... The American People Are Being Served As Dinner By Both Parties Of The United...
Scroll to top