On May 10 2012, a date that will truly live in infamy. Mr. Barack Hussein Obama became the first sitting U.S President to endorse Same-Sex unions and legally brand it marriage. His utterance and his actions since have sent ripples throughout the nation, and the world. Even if you are one who is politically uninitiated or believe that matters of politics don’t effect you, you will inevitably be effected.

One can not but be a stunned witness to the consequences of the unprecedented endorsement of the Chief Executive. From schools offering “gender neutral” restrooms, to the abolishment of “Don’t Ask, Don’t Tell” and the Defense of Marriage Act, to the proliferation of more overt gay and lesbian depictions on TV, in every form from cartoon to Reality TV, the gay, lesbian, and even transgender lifestyle is being presented as on par or equal with that of the heterosexual lifestyle. Once staunch pro-traditional lifestyle choice organizations such as, the American Boy Scouts and more recently the American Presbyterian Church have been moved, pushed, or dragged to accept and endorse the alternative life-style and same-sex marriage.

May God have mercy on anyone who dares to express the slightest displeasure or disagreement in this radical societal transformation and attempts to stand ground on traditional American Christian principles. The wrath of naked intolerance will besiege you, unmercifully.  Just ask former Mozilla CEO Brendan Eich who was forced to resign for his donation to an winning California campaign against same-sex marriage, some four years prior. Ask business owners such as Crystal O’Connor co-owner of Memories Pizzeria in Indiana, some 20 miles from South Bend, who has been forced to close because she simply told a news reporter, who was desperately seeking a story, that she would not cater a gay wedding. When was the last wedding that you went to that served pizza? Ask Aaron Klein former owner of Sweet Cakes By Melissa, a family-owned Christian bakery in Oregon, who was forced to close down because they could not bake cake for a lesbian couple – who were regular clients – because of their religious convictions. Or even today’s display of rabid intolerance by the extreme sect of the homosexual community, or those causing chaos in their name, of anyone simply expressing disagreement with their choice of life-style – the fight over States passing Religious Freedom & Restoration Act [RFRA]. States are simply applying what is already a federal law to their States in order to specifically limit the governments ability to infringe on the religious interest of the it’s citizens – ALL OF IT’S CITIZENS. I thought that the Constitution of the united States already did that. It may be just my confusion.

What is most interesting with this issue is that RFRA was sponsored by Democrat Senator Chuck Schemer, past overwhelmingly by Congress, and signed with much fanfare by Democrat President Bill Clinton in 1993 in order to protect the religious rights of Native American Indians to practice their religious ceremonies from government intrusion. It had nothing, and has nothing, to do with the homosexual nor gay life-style. The words referring to homosexual, gay, lesbian, transgender, or any coded language specifically referring to any group of citizen’s sexual orientation, or any orientation for that matter, can not be found in the law. And it has never been used to infringe on the rights of gays or lesbians. But, it was in the Hobby Lobby Supreme Court decision of June of last year that RFRA saved Hobby Lobby from having to sacrifice it’s moral code and be forced by the federal government’s Obamacare mandate to provide birth control pills. Huumm!

If one were dropped into America from out of space and watched the news over the past 6 or so years he would think that gays and homosexuals were being rounded up and slaughtered, publicly lynched and flogged, stoned by citizens at their very sight, and economically being depressed. But the truth and facts are much less dramatic. The gay and lesbian community are statistically more educated and earn more than their heterosexual counterparts, according to 2013 U.S News report. And according to the 2012 F.B.I Hate Crimes Statistics, less than 20% of crimes were due to one’s sexual orientation, while nearly 50% was due to one’s race. Also if one did not know any better, due to the gross propaganda by the Media and Entertainment Complex, one would think that the Lesbian, Gay, Bi-Sexual, & Transgender [LGBT] community was a dominant persuasion in the nation. In fact the LGBT community makes up just less than 4% of the nation’s population. But due to the mass saturation of liberal progressive Media’s false stories and orchestrated discourse, one would think that it is Christians who are out seeking homosexuals and terrorizing them.

Due to the increased secularization of the culture, not just in America, but in Europe, the Gay Movement has been growing, with muted opposition. But since the appointment of Mr. Obama as Chief Executive and President of the U.S, their agenda has gone into warped speed. And with the literal abandonment of the defense of traditional social values by the National Republican party, the radial Progressive Left has been successful in dividing the nation and causing chaos. Some could successfully argue that the recent favor of the LGBT community by the National Democrat party has more to do with politics than principles, or a coming to Jesus moment. The coffers of the federal and States, and even Big Business, stand to benefit greatly due to the legalization of same-sex unions, according to a 2012 CNN Money report.

The seemingly exclusive targeting of those of the Christian persuasion can not be overlooked. Particularly under this Administration, anything Christian has been treated like the red-headed stepchild who was birthed by accident. Under this Administration Christians have been placed on the same list as Hamas and Al-Qaida as enemies of the State by the Military and terrorist by Homeland Security. Coupled with the further feminization of the nation’s culture and personality, fewer of American youths have truly positive masculine role models or ideals to emulate. The Clint Eastwoods and Sidney Poitiers of generations past have been replaced with Rue Pauls. The days of speaking stern grounded in principle, has given way to speaking softly charged with emotional impulses, so as not to possibly offend someone. And the strong hard nose father figures have been largely castrated by submitting to the illogical popular notion that the traditional role of the woman equates to servitude. Moralism, defining right and wrong, has become an issue of feelings and comfort, rather than beliefs and principles to too many Americans, particularly the youths. It is past time for the “silent majority” to stop being so silent.

The radial gay agenda is being propagated via fear, intimation, and false truths, not principle or strength of position.  The LGBT people could have put all of this energy behind a movement to pass Civil Unions. But, they chose, and were guided, to the path of most resistance, confrontation, and that would cause the most division. The institution of marriage is more than a governmental franchise, it has roots in the Bible, and many other books of religion. It has one main purpose that has been long recognized that defines it – procreation. The assault on the institution of marriage and Christendom are intertwined. It is about their destruction.  And with it, goes the foundation on which this great nation surpassed all others.  Just as gay activist Masha Gessen frankly admitted, “The push for gay marriage has less to do with the right to marry – it is about diminishing and eventually destroying the institution of marriage and redefining the ‘traditional family.‘” And more importantly, as Mr. O promised to fundamentally transform this nation, he’s not doing it as much economically, but by social re-engineering. Real fundamental change comes from changing how we see each other, how we relate to one another, and changing the common values we hold true. Our foundation, our strength, has always originated in the church – particularly the Judeo-Christian Church. Whether you attend church or not, those principles are woven throughout our the society. The abolishment of moral values or absolutes and making the issue of truth irrelevant in our society negatively effects us all.  As Alexis de Tocqueville, 1800’s French political thinker and historian, prophetically stated, “I sought for the greatness and genius of America in her commodious harbors and her ample rivers – and it was not there.. . in her fertile fields and boundless forests and it was not there . . . in her rich mines and her vast world commerce – and it was not there . . . in her democratic Congress and her matchless Constitution – and it was not there. Not until I went into the churches of America and heard her pulpits aflame with righteousness did I understand the secret of her genius and power. America is great because she is good, and if America ever ceases to be good, she will cease to be great.”

At the end of the day, it is up to you to chose the future of this nation. 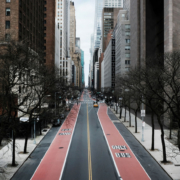 Forty Second Street in the time of coronavirus. Photo: Spencer Platt/Getty Images Mozilla's CEO Firing Due To His Position On Same-Sex Is Further Evidence Of Brown Shirt-Like Silencing Of Opposing Points Of View

Forty Second Street in the time of coronavirus. Photo: Spencer Platt/Getty Images Why Is There A Silent War Against Christendom...In America?

Forty Second Street in the time of coronavirus. Photo: Spencer Platt/Getty Images Are We Truly All Socialist Now: Review Of The First 2016 Democrat Socialist Debate

Michael Brown: The Joke’s On You America Iranian Nuclear Agreement-Obama’s Past-There’s Nothing To See H...
Scroll to top