We are in another week of intense emotionally charged looting, rioting, killing, and organized chaos and anarchy for what is supposed to be a reaction to the senseless death of George Floyd on Memorial Day who died with the knee of a Minneapolis policeman pressing on the back of his neck.  His death was indeed senseless. And justice should be served justly and appropriately by the justice system.  It matters little to nothing the ethnicity of either Mr. Floyd nor the officer(s) involved in his death. His death was senseless and most unnecessary. And it was a crime.  That should be what matters in any case – including this one.  But it is not.  Thanks to the extraordinary job that Progressive Liberals has done on the nation’s education system and the Media.

The successful removal of the church and the parents as being the main agency for the teaching of values to American children since the late 1960s, and the product thereof, is never more apparent and on full display as we witness the organized chaos and destruction by mostly young college-age youth in American towns and cities. The senseless and destructive antics that are occurring on the streets of America, not just today, arguably in the past 20-30 years, would make John Dewey, an early 20th-century philosopher, educator, and a communist/socialist, blush with pride.  His ideological coattail in academia is so pronounced that if you or your children have been taught by an educator who graduated from Columbia University you may want to get an enema.

Many passive bystanders want to point to “racism” and the historical mistreatment and injustice placed on the black-American by Caucasians, and or some connotation of it, as the driving issue of today’s social unrest. To some degree, I would agree.  But the overarching factor is that economic illiteracy, the decimation of the nuclear American family, particularly in the black-American community, and the banishment of Judeo-Christian American Biblical teachings from the nation’s schools and local squares is what is causing us to piss and defecate on our own beds without regard to the thought of where we are to sleep next. In 1962 Engel v. Vitale the Supreme Court abdicated Constitutional precedence and removed the Bible and prayer from public/government schools.  In 1969 the National Education Association [NEA], in it’s Forecast for the 70’s, began it’s push to lower the age of American children’s entry into the formal education system to two.  Under president Nixon, the school-age was lowered forcing children out of the parent’s teaching, even if the school education was counter to their religious beliefs.  During Lyndon Johnson’s reign as U.S President, an amendment to Title 5 was enacted to forbid the woman’s qualifying for federal government economic assistance if a man was living in the home. That one act not only removed the Black man as a father from the home physically, but the presence of the masculine ego. As for the societal psychological dysfunction that is running throughout the black-American community, though the black-American community has upwards of 1.2 Trillion dollars of post-taxed wealth flowing through its economy annually its behavior regarding economics and finances has been most self-destructive.  Despite the history of its massive and incredible display of self-sustaining economic mastery and wealth when during the turn of the 20th century whole black-American communities and districts such as Sweet Auburn Avenue [downtown Atlanta], Rosewood, Florida, and Tulsa, Greenwood, Oklahoma, it was actually so wealthy it was coined “Black Wall Street”, just to name a few, to too many the outward appearance of the community today is that of economic paupers and vagrants, and without self-control.  But with desegregation and the attachment to the hip of the political party [the Democrat party] that has successfully convinced blacks that they do not need to worry about being self-sufficient and economically independent, that it would provide all its needs and correct all the supposed wrongs to make it whole, socially and economically.  Right.  Are we to ignore that it was the Democrat Party’s policies that placed Blacks in this socially and economically disadvantageous position in the first place?  It reminds me of the story of these great sea birds, who were great hunters, and successfully fed themselves for generations – until human fishermen discovered them and started to feed them regularly.  Soon the birds became so dependent on the fishermen feeding them as time went on they lost their hunting skills – and soon became extinct.

So today the nation is engulfed in daily riots, looting, murdering, and anarchy supposedly by “peaceful” protestors upset with the wrongful death of George Floyd supposedly at the hands of a police officer.  But if it was just that, I don’t believe that there would be any rioting and destruction occurring in the streets of America today. The riots are due to simple injustice and senseless death of a citizen by a policeman.  What set this inferno off was the fact that a video of a black-American dying at the hands of a Caucasian officer.  This lit match was dropped in an ignitable environment of a society intoxicated with naked political correctness, particularly those under the age of 40, educated and conditioned on the notion of the eternal injustice that has been done the blacks in America. And that due to that there is “systemic racism” that ALL Caucasian people are guilty just on general principle.  Nevermind that the average American today has not , nor been party to slavery, nor have experienced TRUE naked racism.  Nevermind that the black-American community is the wealthiest Black community on the planet – by a galaxy mile. If the mere thought of human slavery was an issue that the U.S political structure and American people found so repugnant then there would not be an estimated 40.3 MILLION people in slavery today – a figure that is 3 times larger than the so-called trans-Atlantic Slave Trade.

Think about this for a tic.  The nation is just beginning to reopen businesses after being forced to close for 3 plus months by the government in the supposed response to the COVID-19 Pandemic that disproportionately gravely harmed the Black community and has put nearly 40 MILLION Americans out of work.  Hoards of Blacks, many young, many statistically from fatherless homes, along with some Whites expousing the socialist construct of “Social Justice” are setting fire to the very same businesses that could have employed them and are wrecking the community’s economy that will have to raise taxes upon the taxes that they bitch about being too burdensome.  There is not the slightest mention of the Bible tenet and absolutism of right and wrong and the unabashed denouncement of the destruction of another’s personal property, principally not from the Establishment Media.  True north in a calibrated compass is always true north.  No matter the season.  The lack of comprehensive reasoning is stunning and can only be due to the fact that deductive comprehensive thinking is no longer largely encouraged in government schools today. It is no surprise the United States grossly lags behind many industrialized nations academically, especially when it comes to reading.

What many may see as poetic justice, the worse destruction is occurring in Democrat-run cities and States.  But the intellectual rot that has taken place over the past 60 plus years due to the Progressive Liberal take over of the educational system and society should be the truest of concerns.  As Abe Lincoln prophetically stated, “The philosophy of the school room in one generation will be the philosophy of government in the next.”  If this great nation is to be saved, with all of its cherished God-endowed rights and freedoms for Man, it must start in the classroom, in the homes, and then in the schools.  The reverence and true knowledge of this nation, and the Constitution and founding documents and Biblical Tenets must be taught honestly and without filters, and the basic ability to comprehend facts and figures has to be restored in our education system or the flames of the demolition of the America and the American way, that we have come to take for granted, will continue to grow until it is nothing of a free America but ashes of remember when. Will anyone as vigorously protest the loss of America? You’re right.  It won’t matter then. 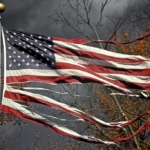 The Great American Experiment Is Over
Scroll to top wpDiscuz
1
0
Would love your thoughts, please comment.x
()
x
| Reply